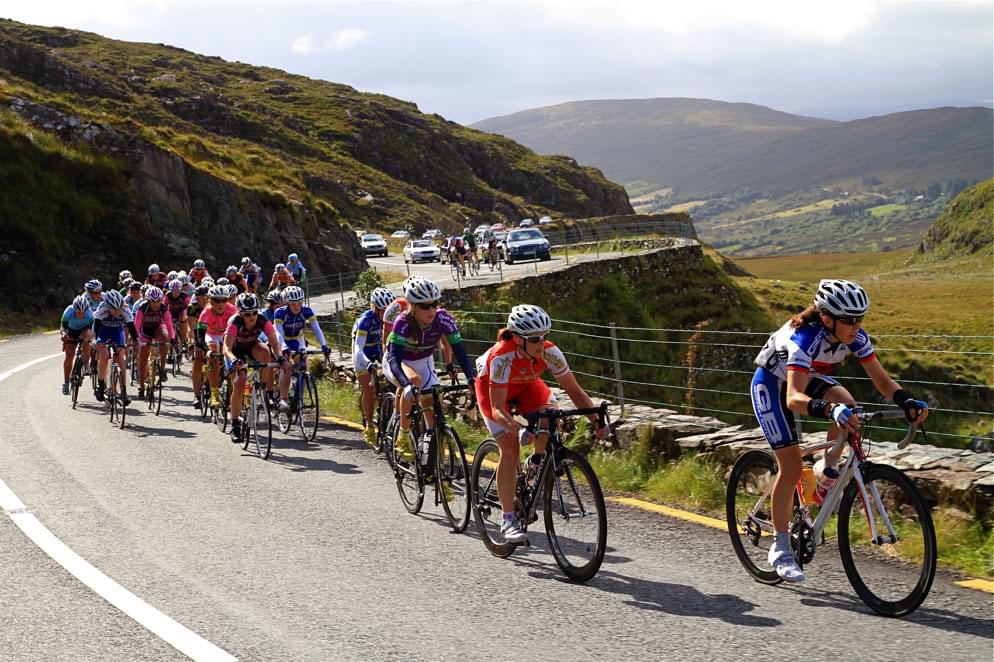 Karla Boddy of High Wycombe CC made it a hat trick of wins in the sixth and final stage of An Post Rás na mBan in Sneem today as Denmark’s Kamilla Vallin was confirmed as the overall winner.

Boddy’s blistering sprint finish was employed to good effect once more as the riders raced down from Moll’s Gap to the finish where the Englishwoman got the better of Fiona Meade (Munster) and Louise Moriarty (Look Mum No Hands).

Vallin controlled the efforts of Ireland’s Lydia Boylan to close the six second gap and took the final pink leader’s jersey of the event she has led since the third stage.

With a short 58km loop to finish after five hard days of racing on the Ring of Kerry, the action was hectic right from off in Sneem with Ishbel Taromsari (Pedal Power Racing Team) the first to try her luck off the front.

Silja Visser then went clear and opened up just under half a minute lead before she was absorbed by the bunch offering an opportunity for her Distric Team NH-WTC de Amstel team mate Riejanne Markus to solo clear.

She too was reclaimed after seven kilometres out front as the field turned left in Kenmare for the five km slog to Moll’s Gap.

A series of attacks on the lower slopes came to nought and it was IVCA Queen of the Mountains jersey holder Amalie Dideriksen that led a depleted bunch over the top of the category two ascent.

Dideriksen already had an unassailable lead in the Queen of the Mountains competition going into the final stage but asserted her status with top spot on the climb ahead of Lowri Bunn (Abergavenny RC) and Iona Sewell  (Geoffrey Butler Cycles).

The third cat climb to Carraig na Gaoithe failed to split the group any further and Sara Ortiz of Black Road Racing decided to take her chance on the fast drop back into Sneem. Ortiz opened up a 15 second lead but the bunch were ever vigilant and by five km to go it looked certain to be decided in a bunch sprint.

Boddy is only racing for 18 months but has already carved a niche as a sprinter, a reputation she enhanced with a string of top results in stage finishes this week.

The downhill sprint favoured a long lead out and it was Boddy who fired first, opening up a narrow advantage that Fiona Meade (Munster) and Louise Moriarty (Look Mum No Hands) could not quite cancel out.

Boddy’s third win in a row to go with fifth overall made it a successful week’s racing for the Buckinghamshire rider.

Vallin, meanwhile, finished safely in the main group to rubber stamp her overall win. Having held the lead since the third stage, the 19-year-old from Denmark fought off the challenge of Boylan and cruised in for a narrow but convincing win.