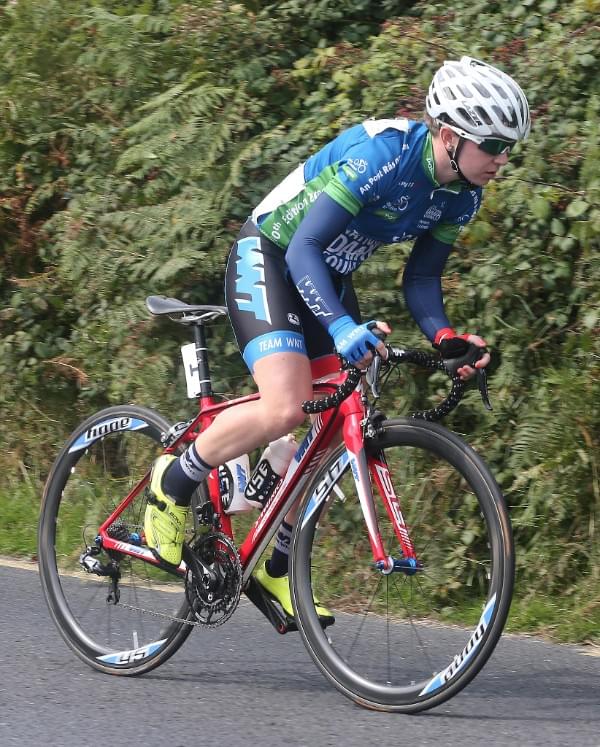 Lydia Boylan is the leading Irish entry in An Post Rás na mBan which begins on Wednesday in Kilkenny. Boylan, the reigning and three-time Irish national road race champion, warned up for a maiden An Post Rás na mBan title with victory in the Laragh Classic in Wicklow last Sunday and has a UCI stage victory in the Settmana Ciclista Valenciana earlier this year to her name.

Second overall last year and in 2012, her national stage race is a major season goal and Boylan is part of a strong British registered WNT team that includes Kerry’s Josie Knight, also a team-mate of Boylan’s on the Irish national high performance track squad.

There are several other Irish riders peppered throughout the list of visiting teams including An Post Rás na mBan stalwart Lauren Creamer and Alice Sharpe of the British squad NCC Group Kuota Torelli. Sharpe was 15th overall and 4th Under-23 last year as a road racing neophyte and will be looking forward to building on her experience of 12 months ago.

Róisín Thomas is back for a second successive year, this time with her AlAsayl Cycling Team from Dubai while Glasgow-based Ellen McDermott from the British EDCO Continental is another returning rider.

The local squads boast the cream of home-based racing talent with Claire McIlwaine of Team Ulster back to defend the green jersey she won as the Kilkenny County Council Best Irish rider. McIlwaine was 13th overall and with a similar route to 2016, will be gunning for a top ten overall.

She’ll face a stiff challenge from within her strong Team Ulster squad with ace tester Eileen Burns looking forward to the stage four-time trial next Saturday and Katharine Smyth, second to McIlwaine last year and second in the National League, is a year stronger and wiser at the art of road racing.

Sharon Bird and Lisa Lamont complete a strong Team Ulster lineup that has made An Post Rás na mBan a major season focus.

Perhaps the biggest threat to a successful Best Irish rider defence for McIlwaine will come from Eve McCrystal of Garda CC. The Paralympic gold medal winning tandem pilot is back on a solo machine this week after winning two world championships with Katie George Dunlevy in South Africa at the weekend.

McCrystal won the green jersey in An Post Rás na mBan in 2015 when she finished ninth overall, just 36 seconds behind Germany’s Stephanie Pohl. A slipped chain in the time trial on that occasion cost her a higher placing and, having dominated the National League, McCrystal will surely have her sights set on more than just the Kilkenny CoCo green jersey this time round.

She’ll be joined in Kilkenny by Katie Earlie, one of the strongest riders on the Leinster road racing scene, Sarah Piner, Mia Griffin and Hilary Hughes.

Back at An Post Rás na mBan after a couple of seasons sabbatical, Team Leinster have selected emerging riders. Jennifer Bates has been a strong rider on the Leinster road racing scene for several years while Beata Golczak, Nicole Gorry, Sinéad Molloy and talented runner Imogen Cotter will be looking forward to their first five-day stage international stage race.

Another squad with a focus on developing talent is TC Racing which tuned up for An Post Rás na mBan with an extended racing trip to Belgium recently. Tom Clougher can call on experienced Rás rider Niamh Stephens to guide Orla Desmond and Laura Tighe through the week.

Scott Orwell Wheelers have sent riders to every Rás na mBan and to many editions of the races which preceded it. Orla Hendron, who holds the record for participations in the event, is now managing the squad which includes Kerrywoman Michelle Geoghegan – a former international with vast stage racing experience – Dubliner Orla Walsh,  whose fast finish helped her to third in the National League and Dublin-based US rider Monica Freiband riding her first international stage race.