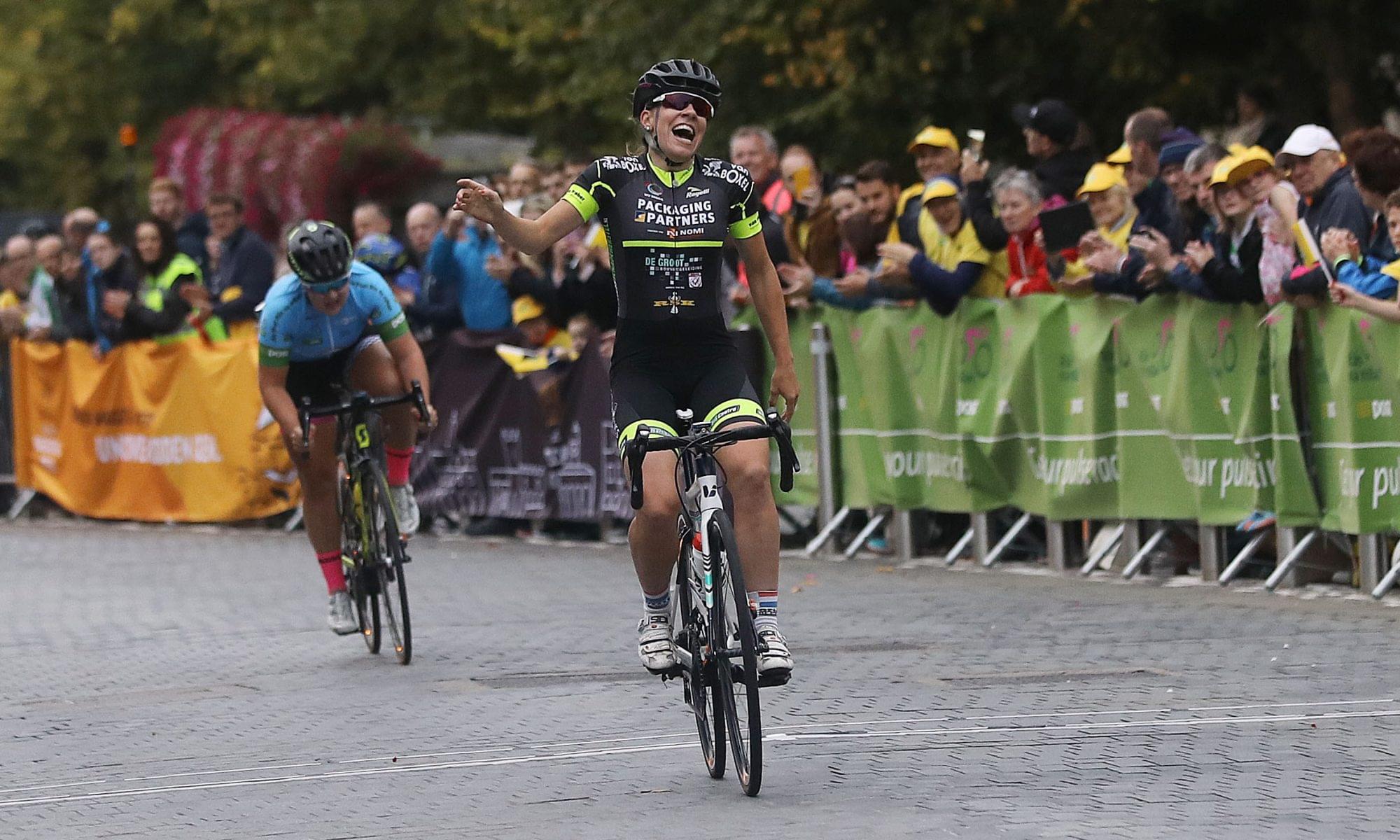 The Netherlands’ Belle de Gast of WV Breda took her second stage win of the week as she sprinted up the Parade in front of Kilkenny Castle to win the penultimate stage of An Post Rás na mBan.De Gast led in Sweden’s Frida Knutsson of Team Crescent DARE and overall race leader Elinor Barker of Team GB at the end of the one-hour of racing after the top three detached themselves from the main group in the final two laps of the 2km circuit.

Barker leads overall ahead of Alexandra Nessmar of Sweden going into tomorrow’s 85km final stage due to finish at the Parade in Kilkenny at 2pm.

The stage was run off at a frenetic pace with a much slimmed down bunch still in contention at the end of 45minuts and three laps.

Points Race World Champion Barker was one of the first riders on the attack when the race director’s flag came in to start the race and the Great Britain team was rarely far from the action on the front.

Mel Lowther, leader of the Women’s Cycling Ireland Young Rider competition, was out front for almost a third of the race before she was reabsorbed by the bunch and almost immediately replaced out front by her Team GB team-mate Becky Raybould.

The irrepressibly De Gast, victor of the opening stage into Gowran on Wednesday, went clear again with Knutsson and Barker recognised the importance of the move.

Their lead was never more than 50metres but it was enough to ensure the trio would contest the win with de Gast, a truly remarkable cycle racing rookie with a history of playing top level field hockey in Holland, first around the final bend.

Neither the gradient increase nor the road surface would deny her and de Gast’s power was never in doubt as she put her arms in the air for a second time on her first visit to Ireland.

Knutsson’s second place made it three podiums this week and four in her two visits to An Post Rás na mBan but the Swedish Under-23 star is still waiting for the elusive win.

Barker had no answer in the final sprint but her overall command of the race is vice-like ahead of tomorrow’s final stage, an 85km rolling test which includes the tough climb at Inistioge.

The Welsh wizard, who celebrated her 23rd birthday on this race, has a full house of jerseys, with a commanding lead in the Wicklow 200 Mountains classification and the narrowest of advantages in the NDC Points competition which she leads from her team-mate Alice Barnes on countback of stage wins.

Making it another great day for Team GB, Mel Lowther retains her lead in the WomensCycling.ie Young Rider Classification.

Eve McCrystal (Garda CC) showed the quality of her current form with another strong top ten finish and she sits in a fine fifth overall while retaining a comfortable lead in the Kilkenny County Council Best Irish Rider Classification.

The race concludes in Kilkenny City on the Parade in front of the Castle tomorrow after a final thrash up the Medieval Mile following over 400km of tough road race action.