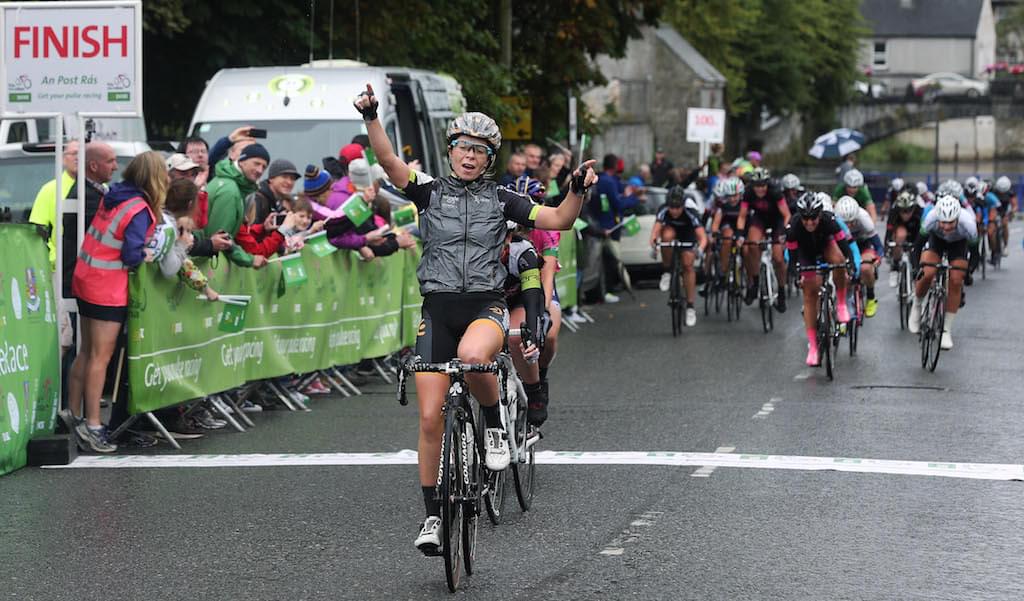 Four of the top six from last year’s An Post Rás na mBan are on the start list for this year’s event which begins in Kilkenny this coming Wednesday (7th).

Last year’s runner-up Eileen Roe will be bidding to go one better this year in the six stage, five-day race having found a last minute berth on the British UCI squad WNT.

The Scottish professional, a former British Circuit Race champion, won last year’s final stage into Ennis and finished just seven seconds down on Stephanie Pohl after five days of racing. For this year’s 11th edition of Ireland’s premier women’s stage race, Roe will ride alongside two of her biggest rivals in last year’s general classification on one of the record number of British teams heading to Kilkenny.

The rider entry is also a new record, with 121 riders representing 25 teams getting set to line up for the first 60km stage at 6pm on Wednesday evening.

England’s Natalie Grinczer produced a superb time trial victory last year which helped propel her to fourth overall and she returns in a crack WNT line up which is possibly the strongest in the race.

Alongside her is reigning Irish Road Race Champion Lydia Boylan, a previous runner up in An Post Rás na mBan who finished sixth with WNT last year.

Joining Roe and co is Emma Norsgaard Jorgensen (Team Rytger), the Danish National Road Race Champion who won the second stage of last year’s event on her way to an eventual third place finish and victory in the Womenscycling.ie Young Rider Classification.

13 nations are represented in the list of 25 teams.  Erin Kinnealy will do battle with the CCN Energy HR Australia squad while Rás na mBan’s first African competitor is promising full-time racer Hazel Magill from South Africa guesting with the GB Cycles squad.

An Post Rás na mBan has been honoured with a visit from our Celtic cousins from Brittany over the past number of years and Gael le Bellec has once again assembled a blend of experience and youth with Cecilia le Bris and Gabrielle Rimasson set to animate the race action in traditional French style.

Action gets under way with the 60km first stage starting at Springhill Court Hotel at 6pm on Wednesday and the riders will have completed six stages and almost 400km of tough racing action by the time the race ends outside Kilkenny Castle next Sunday evening.