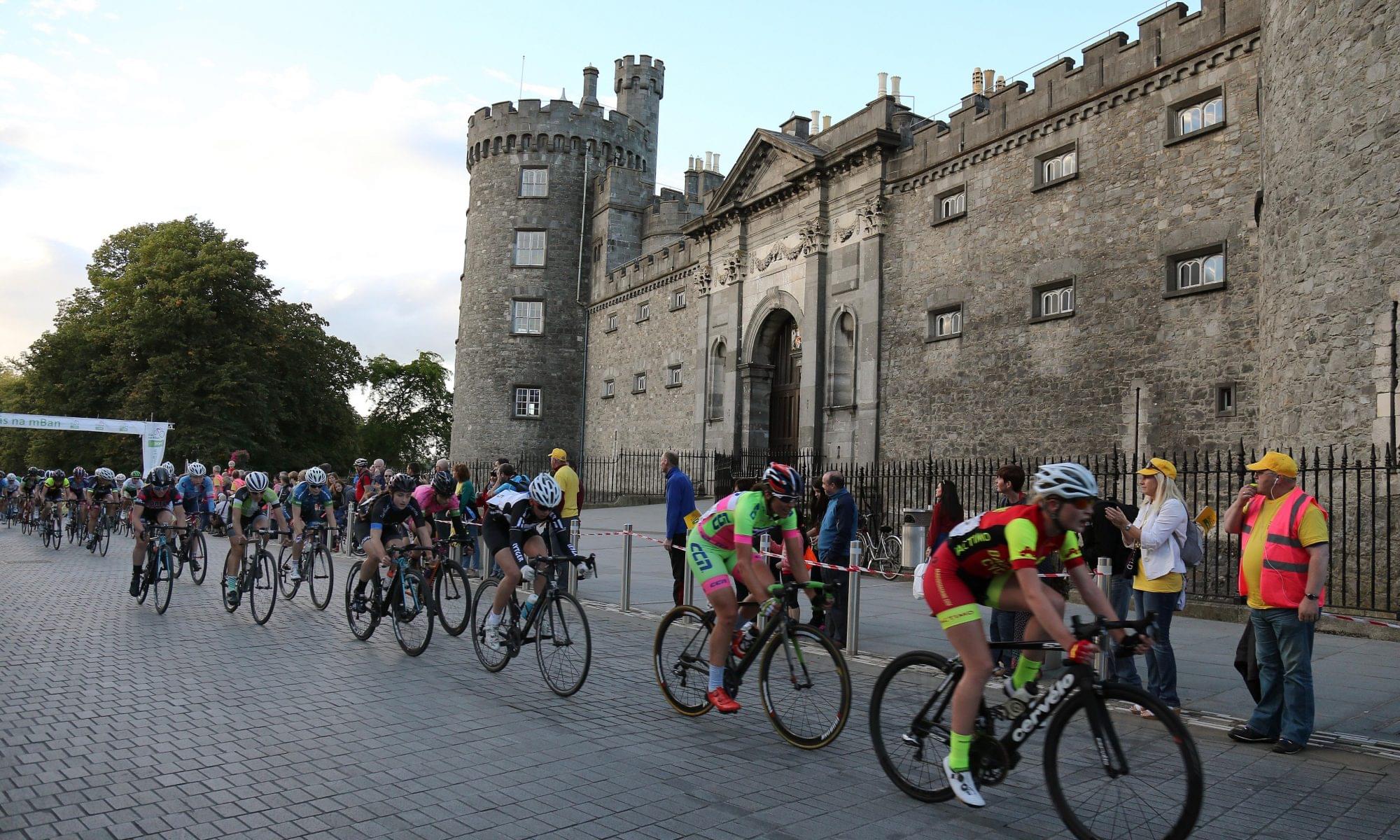 A new stage finish in Gowran and a final dash up the Medieval Mile in Kilkenny are the highlights from the 2017 An Post Rás na mBan route announced today.
Following a similar format to recent years, the six-stage, five-day international stage race for women includes four road race stages of varying length and difficulty, a time trial and a circuit race which for a second year centres on the beautiful city of Kilkenny in Ireland’s Ancient East.

Once again, the route offers a variety of challenges, from testing hilly stages including the stage three summit finish to the Nine Stones on Mount Leinster, to the stage five time trial for the power riders on flat roads.

Race Director Valerie Considine believes the 2017 route will challenge the riders and offer an opportunity to further showcase the beauty of Kilkenny City and County:

“The move to Kilkenny last year was a really great development for our race. Last year’s route created by Fiona Cooke and Ger Madden had something for everyone and this year we’ve been keen to ensure that we retain the best aspects of those stages with a few important changes.

“The move to a stage finish in Gowran on day one is something that I believe everyone will enjoy. It’s a beautiful village and a great setting while the final stage up the Medieval Mile in Kilkenny sure to attract a crowd.

“The stage three hilltop finish on Mount Leinster was a superb occasion and I look forward to seeing many bike fans on the Nine Stones to watch the riders do battle again this year.

“The city centre circuit will be a thrilling spectacle once more and it’s particularly gratifying for us to be able to bring top class women’s bike racing to the people in such an iconic setting as Kilkenny Castle.

“We’ve had wonderful support from Kilkenny County Council and An Garda Síochana in our preparations and they have helped smooth the not inconsiderable process of bringing top class bike racing to the county.

“Our major backers continue to make this race possible and it’s gratifying that we have retained the support of so many partners for another year.”

The race kicks off on Wednesday 6th September with a 70.1km road race beginning at event headquarters, the Springhill Court Hotel and finishing for the first time in the picturesque village of Gowran on a mainly flat course including a single hill offering points for the IVCA Wicklow 200 Queen of the Mountains classification.

Thursday’s second stage is a rolling 75km road race starting and finishing in the pretty village of Castlecomer. Running on roads which will be familiar to riders in the Deenside Cup and Des Hanlon classic races, the race begins in the leafy surroundings of the Discovery Park in Castlecomer.

Friday’s third stage is a repeat of last year’s epic assault on Mount Leinster when wind, rain and the hilly roads served to create big gaps between the riders on general classification.

As last year, the so-called ‘Queen Stage’ is a daunting 112km slog that culminates in the arduous climb of Mount Leinster to the fabled ‘Nine Stones’.

It’s a 7.8km ascent at an average gradient of 4.4% to a popular viewing point for cyclists and tourists. A short descent at half way offers brief relief but masks the true challenge of the climb.

The following day, Saturday, features two separate stages beginning with a repeat of the 11km individual time trial stage on a flat road just outside Kilkenny City that will challenge the riders’ ability to recover from the previous day’s exertions.

On Saturday evening the riders converge on the world famous Kilkenny Castle for a one-hour, high-octane criterium circuit race on a 2.1km lap that proved to be a real hit with the riders and the large and appreciative crowd lining the circuit 12 months ago.

It will be the fastest bunch stage of the week and is sure to provide spectacular racing action for the spectators in Kilkenny city centre.

It’s a race that will be targeted by the sprinters and will likely play an important part in the destination of the National Dairy Council Points Classification at the end of the week.

The race concludes on Sunday September 11th with a tough 90km on rolling roads beginning and ending in Kilkenny at the end of five tough days of racing.

The big challenge on the final day will come when the riders leave the beautiful village of Inistíoge to take on Woodstock Hill, where the final battle for general classification honours will be joined.

The riders will then race back to Kilkenny where they will travel across the new St Francis Bridge, along the Medieval Mile through the heart of the city to finish in front of Kilkenny Castle.

The 2016 running of Ireland’s premier women’s bike race was the biggest yet with 25 teams on the start line for the 11th edition of Rás na mBan in Kilkenny last September.

The 2017 event will be the second in County Kilkenny and the 31st anniversary of the first Irish international women’s stage race, the John Hearn Memorial held in Tipperary in 1986.