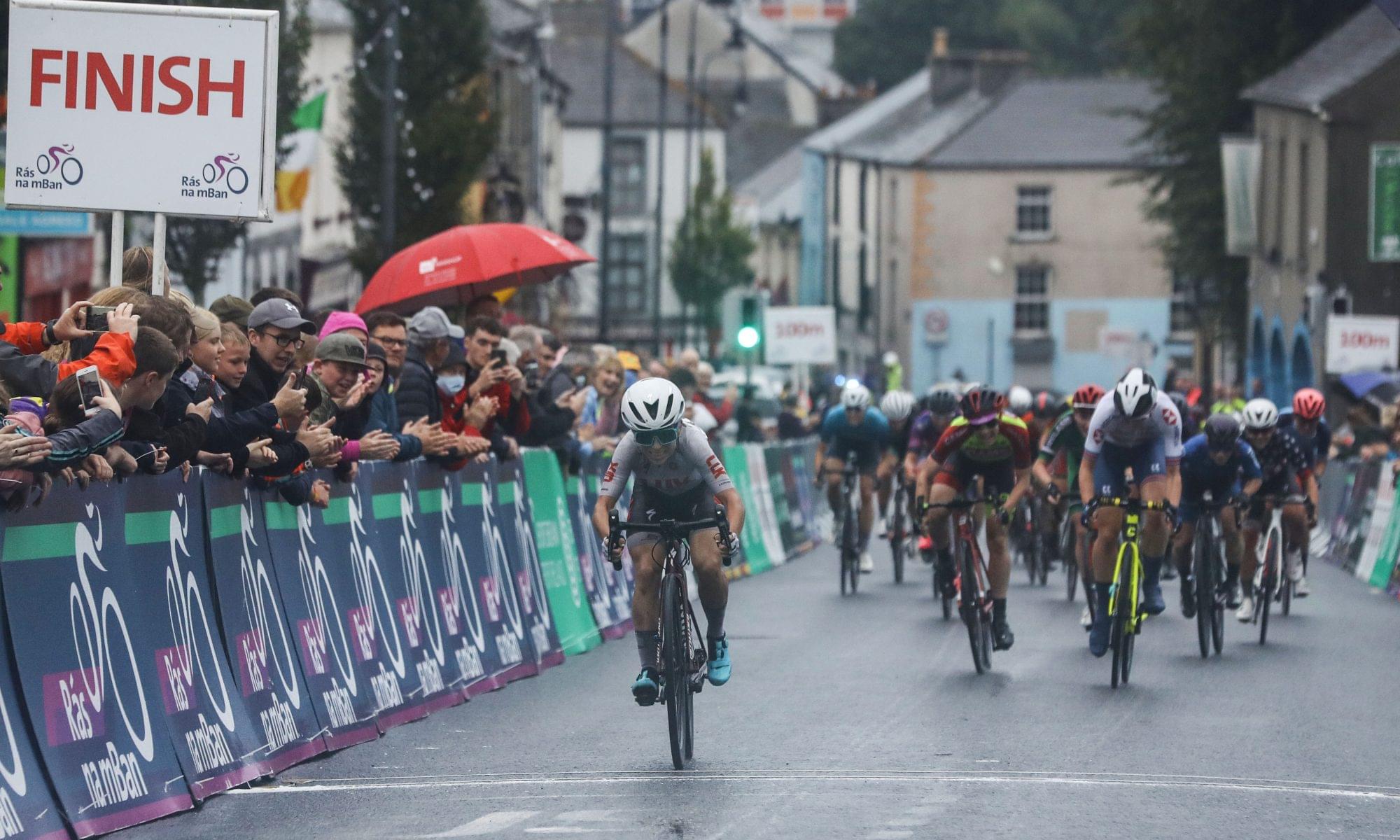 21 teams of five riders departed Springhill Court hotel in damp conditions with little prospect of dry roads between them and the finish line in Callan after 72 km on stage one of Rás na mBan 2021.

The pace was brisk in the opening stages and few of the early attacks gained any advantage as Team Ireland and the GB national squad among others controlled the pace on the front of the bunch.

The Ireland team was particularly motivated to keep the bunch together with local rider Mia Griffin, Alice Sharpe and Imogen Cotter setting a searing pace.

Cotter attacked with purpose on a number of occasions, Danni Shrosbree among those who latched on.

At the tail of the peloton, many riders found the pace particularly challenging as the international teams set a testing agenda.

At the top of Cussaun after 44km Jo Tindley yeas first to the line to secure the first leader’s jersey of the week in the IVCA Wicklow 200 Queen of the Mountains classification.

Inside the final 20km as the riders approached the finishing circuit around Callan, the difficult conditions and mounting fatigue led to inevitable crashes, the first of which delayed more than 20 riders, some of whom were forced to retire.

Among those hindered was Tokyo silver medal winner Josie Knight of Team GB who found herself chasing back on at least twice after being delayed.

As the bunch reassembled it was a large group with almost half the day’s starters who got set to contest the finish in Callan.

Into the final kilometre the GB team placed Abi Smith on the front with Kaia Schmid from Marblehead Massachussets waiting to pounce. Schmid of the US squad Team LUX blasted off Smith’s wheel to take the first stage win of the week and with it the first leader’s jersey of Rás na mBan 2021.

Smith held on for second, several bike lengths behind with Jessica Finney of Cams Basso, third.

Bekki Seal of Torelli Assure-Cayman Islands Scimitar and Schmid’s team mate Makayla Macpherson were next up with Alice Sharpe was first of the Irish in sixth, four places ahead of team-mate while Elia Tutty was awarded the Kilkenny County Council Best Irish rider jersey..

We rolled pretty easy the whole day but I knew it was going to come down to a sprint and I had to be in position,” the 18-year-old said.

“So I made sure I wasn’t going to get boxed in and kind of stayed towards the outside around the last corner I came off the second wheel and just sprinted from there and took the win. It’s my first time in Ireland and my first road race in Europe so it’s pretty exciting.”