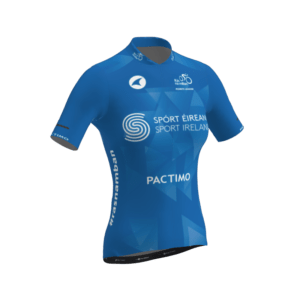 Rás na mBan international cycle race has again teamed up with Sport Ireland in 2022 to help foster the development of cycle racing for women and girls.
Recognising the role which Rás na mBan has played since it took over as Ireland’s leading international stage race for women in 2006, Sport Ireland has lent its backing to the points classification of an event which features full-time professional world championship and Olympic racers competing against top amateurs for five days of top class international racing action centred on County Kilkenny and surrounding counties.

Riders in Rás na mBan will be competing for the distinctive blue Sport Ireland points jersey and the involvement has enabled organisers to introduce Féile Rás na mBan, a festival of cycling fun for all the family which will be bookended by the final two stages of the race on Sunday 11th September.

With bike rides, coaching sessions, bike maintenance help and numerous other activities Féile Rás na mBan will serve as a useful taster ahead of the final city centre circuit race stage of the five-day race and, hopefully, provide some inspiration for the next generation of Rás rider.

Speaking at the announcement of the organisation’s support for Rás na mBan, Sport Ireland CEO Una May said:
“Sport Ireland is delighted to support Rás na mBan again in 2022. In particular, the introduction of Féile Rás na mBan will provide a brilliant opportunity for people of all ages to get involved in cycling on what promises to be a great day out.

“The Rás na mBan has been a significant fixture on the sporting calendar since 2006 providing an opportunity for Irish and international cyclists to participate in high level competition. We look forward to Rás na mBan getting underway and congratulate the organisers on putting together what promises to be an action-packed five days.”

“The support from Sport Ireland in the past two years has been invaluable in shaping the direction of our event which exists to provide an international outlet for Irish bike racers.

“In Féile Rás na mBan we have a forum to encourage participation and nurture future generations of bike riders and, perhaps, future Rás na mBan racers, too.

“We’re delighted to be able to make connections between our event and cycling within the wider community and it has been hugely encouraging to witness the spirit of cooperation between the various agencies and interest groups involved in making Féile Rás na mBan happen.

“We see this as a pilot  model for future years and other events to use.”