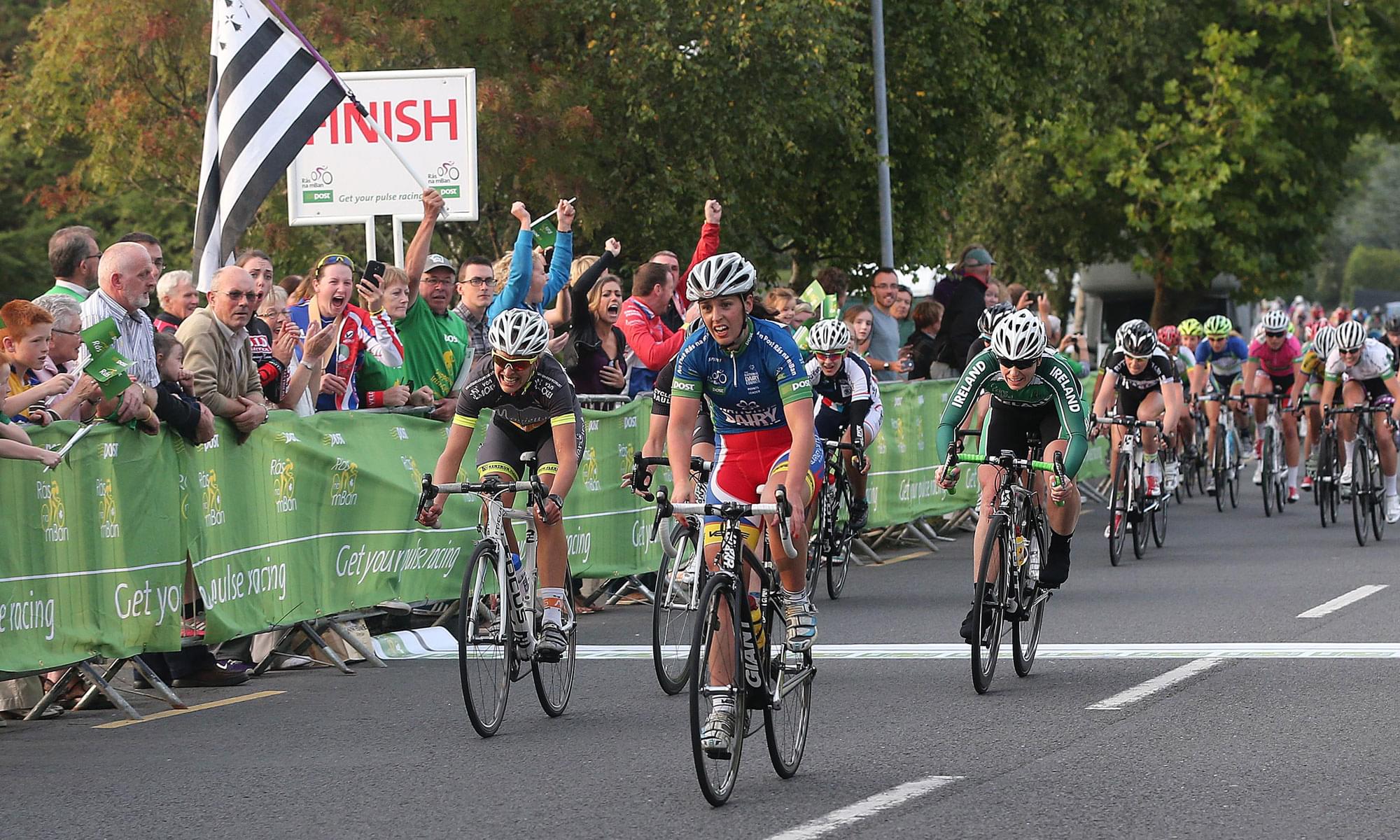 The Team Munster rider added to her impressive palmares with her first stage win of the 2014 race after finishing third in the first two road stages cheered on by a large and vocal fan club from her home in Blarney.

Meade powered off the wheel of stage one winner Femke Van Kessel (Wv Breda-Manieu.nl) on the run to the line after ten fast laps of a 4.1 km circuit at Ballyalla near Ennis on Friday evening.

As a result Meade takes over the lead of the National Dairy Council Points Competition from overall race leader Tayler Wiles (DID Cycle4Life RT) who finished safely near the front of the lead group of 70 riders that fought out the win.

Wiles had earlier dominated the 8km Clare Sports Partnership stage three time trial at Barefield, taking the stage by over half a minute over Dutch rider Mathilde Mathijsse (Bonito Squadra Corse) to establish a clear advantage at the head of general classification.

Mathijsse was second overall heading into last evening’s stage four circuit race but she found herself on the wrong side of a split in the large peloton in the finish and dropped to third on general classification behind Britain’s Molly Weaver (Epic Scott) in the process.

Weaver had already moved into the lead of the Womenscycling.ie Young Rider competition after her third place finish in the morning time trial where she was pipped for second by just three tenths of a second.

Meanwhile Fiona Meade has clear control of the Clare County Council Best Irish Rider competition, a category she has made her own over the years.

Wiles heads the IVCA Wicklow 200 Queen of the Mountains classification and will be favourite to add to her total in tomorrow’s Queen stage, the ominously named Beast of the Burren, which includes three categorised climbs in its 115km total distance.

Meanwhile Meade is focused on retaining her lead in two categories and believes that the NDC Points competition is firmly in her sights.

“I am very happy with the win obviously, you can’t do better than first,” said Meade afterwards. “First over the line is good. I knew where I needed to be coming around the last lap. I had looked at the finish before the stage and there was a bit of a wind so I decided to leave it to the last minute, to the 100 meter mark.

“Femke Van Kessel who won the first stage was in front of me. I came around her as we were sprinting and I got the win so I’m happy.

“I’m used to riding in the bunch with my club. We do a race league every Thursday night and a training session every Tuesday night. My training also involves racing with men. I raced the Suir Valley 3-Day a few weeks back. That’s criterium racing with a bunch of men which is really good training for a stage like this when you have to hold your position in the bunch.

“Tomorrow is going to be hilly, so I’ll be minding myself. It’s doesn’t really suits the points when you’re doing hills. Hopefully I’ll stay on. On stage two I was getting dropped on the climbs. I just need to hang in there tomorrow on the two category one climbs and the category three.

“I’ve got county jersey two years now and I’d like to keep it for the third year in a row now but I do like the look of the points jersey too so I’ll try my best to hold on to that.”