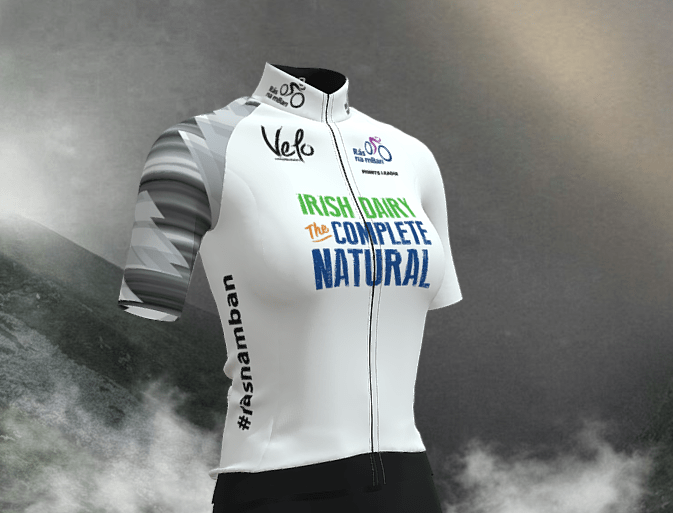 The National Dairy Council returns to support the points classification of Rás na mBan for a seventh successive year with a fresh new look. The Complete Natural is the new initiative from NDC helping consumers to make an informed decision about dairy products and The Irish Dairy – The Complete Natural Points Jersey will be worn by most consistent finisher in Ireland’s top international stage race for women this September.

The rider who accumulates points in each of the bunch stages during the week will wear the white Irish Dairy – The Complete Natural jersey in an event which brings many of the world’s top bike racers to Ireland for five days of top class racing.

Olympic Champion Elinor Barker of Team GB won last year’s event and riders from all over the world will do battle on the roads of Kilkenny and neighbouring counties for the coveted Rás na mBan title.

Many top level and aspiring athletes use dairy products as a key component of their recovery strategy and the Irish Dairy – The Complete Natural jersey is a reward for commitment, courage and class displayed in top class international competition.

The Irish Dairy – The Complete Natural Points Classification rewards consistent performances across the event and often goes to a rider with ability in the high-speed group sprint finishes.

“The National Dairy Council is delighted to support such a renowned cycling event that additionally celebrates women in sport.

“The integral role of nutrition for optimum performance is well-recognised, with research into the role of dairy in this area gathering pace. As milk is an excellent source of high quality protein and provides natural carbohydrate and electrolytes in a fluid form, it is gaining attention particularly in the area of recovery nutrition.

“Milk also naturally provides a number of important nutrients that have important roles in health such as calcium, protein, phosphorus, potassium, iodine, vitamin B2 and vitamin B12.”

Irish Dairy, The Complete Natural’s support for Rás na mBan dovetails with the brand’s backing for a forthcoming RTE mini series ‘We Run the World’ which follows the story of female athletes across sports such as cycling, athletics, hockey, gaelic football and camogie.

Rás na mBan rider and Irish National Track Team member Orla Walsh is set to feature in the series which is set to be aired shortly.