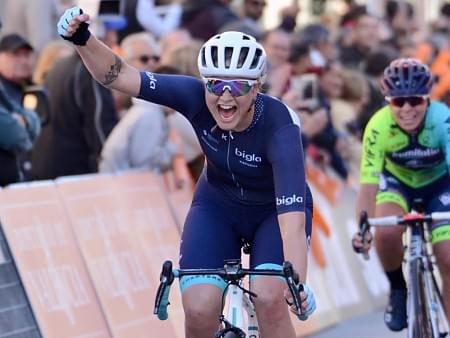 Riders who have graced Rás na mBan with distinction in recent years have been performing with great elan on road and track lately. Here’s a quick update on some of the standout rides.

Norsgaard Jorgensen on Fire in Valenciana

The Bigla-Katusha pro edged Arlenis Sierra in the dash to the line with former world champion Anna Van Der Breggen in sixth.

It’s a result that confirmed the potential Norsgaard Jorgensen displayed in taking victory on the Wild Atlantic Way in 2015.  She finished that Rás na mBan third overall behind world track champion Stephanie Pohl.

The Danish rider is enjoying great early season form and added to her Spanish victory with fourth place on another stage and then a great third place finish in the Belgian opening weekend classic Omloop Van Het Hageland.

Norwegian Lutro, who sprinted up The Parade to win the penultimate stage criterium in Kilkenny last September, was second in a four-rider group which held off the main peloton on the final day of the UAE stage race.

It’s a result which continues the impressive upward trajectory of a rider who charmed everyone in Ireland last year with her sunny disposition and winning mentality.

The Two Lydias Qualify Ireland for Olympic Madison and Omnium

Lydia Boylan and Lydia Gurley, both of whom have represented Ireland in Rás na mBan, wore green with pride at the World Track Championships in Berlin recently.

Boylan, second overall in her national stage race in 2012, and Gurley teamed up to complete the task of qualifying an Irish team in the Madison at the Olympics this summer. The result also serves to qualify a rider for the Omnium in Tokyo, the culmination of a four-year odyssey for the two riders.

The Berlin world championships also featured another rainbow jersey winning performance from 2016 Rás na mBan winner Elinor Barker. The Olympic champion won her fifth senior world title when she took the Points Race on the final day of the event.