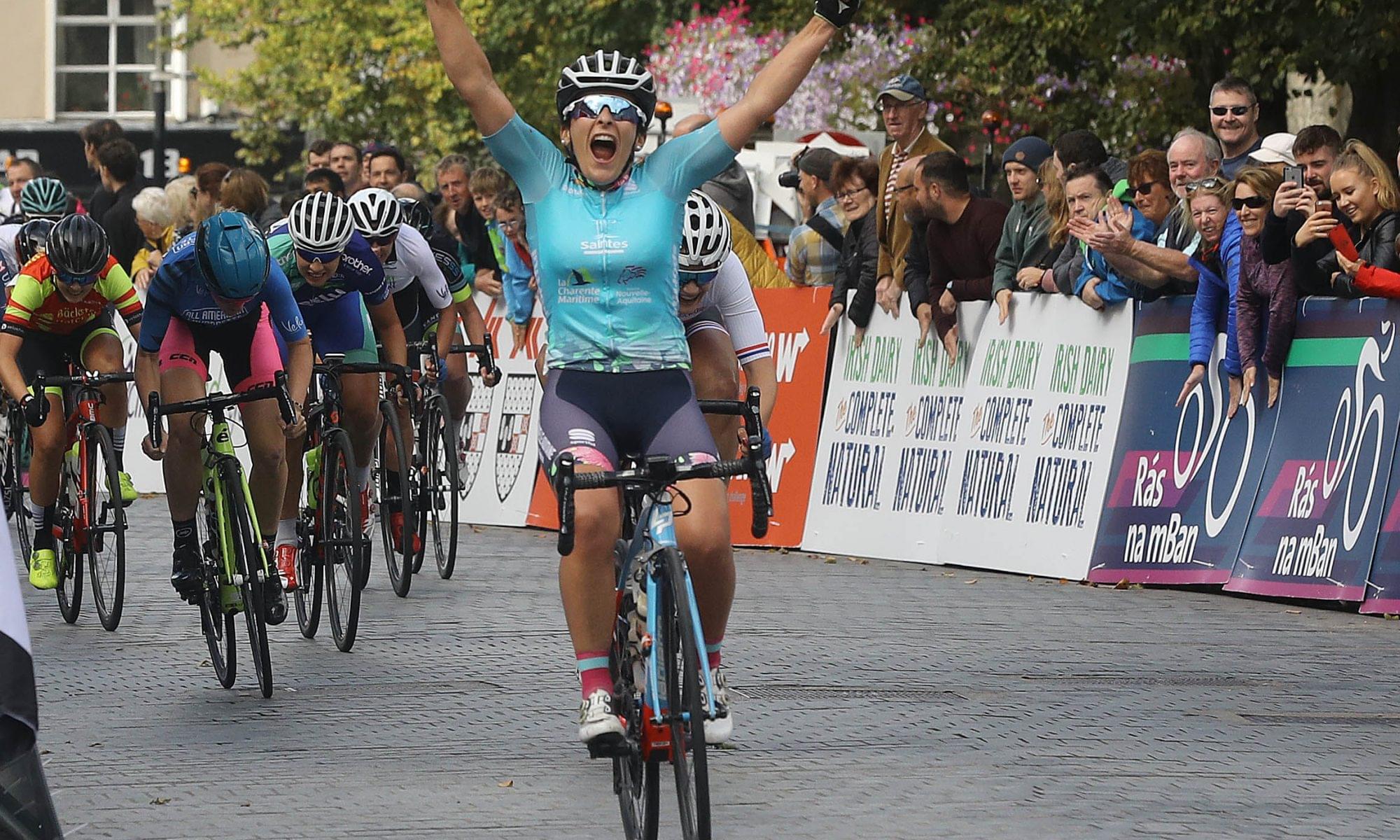 Iris Sachet made it a double French celebration on the final day of Rás na mBan as she raced in for stage honours with compatriot Coralie Demay confirmed as the first French winner of Ireland’s premier international stage race.

Sachet powered up the finishing straight on The Parade in front of Kilkenny Castle to deny Jess Roberts of Team GB and Switzerland’s Desirée Ehrler of CCN Momentum, the latter taking her third top three finish of the week.

Safely in the lead group of 78 in 14th place was Demay, to secure her overall victory by the scant margin of two seconds over Nicola Juniper, the margin that separated the two after Saturday’s fourth stage time trial.

Juniper pushed hard on the single categorised climb of the day at Woodstock after 42 of the 90km but Demay was her shadow throughout and Juniper was happy to accept a fine second place overall and the Wicklow 200 Queen of the Mountains Classification to go with two stage victories.

Demay’s stage four time trial success was the launch pad for her bid while other stage winners during the week included Nina Kessler and Rhona Callander along with Sachet.

Sachet’s final stage success combined with an eighth place finish for Nicola Juniper meant the latter was edged out of the Irish Dairy, The Complete Natural Points Classification while Maeve Gallagher from County Mayo can enjoy her 17th birthday on Monday having won the Kilkenny County Council Best domestic-based Irish Rider category.

Lydia Gurley of Team Ireland was the highest placed Irish rider on general classification, the Majorca-based Athenry native another with a birthday to celebrate courtesy of tenth place overall.

Team GB were the overall team winners while the road team based around the national track development squad VC Éiriú were the Best Irish Team.

Lauren Creamer’s powerful performance in leading a nine-rider group clear of the bunch for much of the stage earned the Scott Orwell Wheelers rider the Daily Beast Award for Combativity.

Coralie Demay now returns to her professional team FDJ Nouvelle Aquitaine Futuroscope after her week in Ireland with Team Breizh. The Breton regional team have been coming to Rás na mBan for six years and can now celebrate overall success to go with the maiden stage victory on stage four.