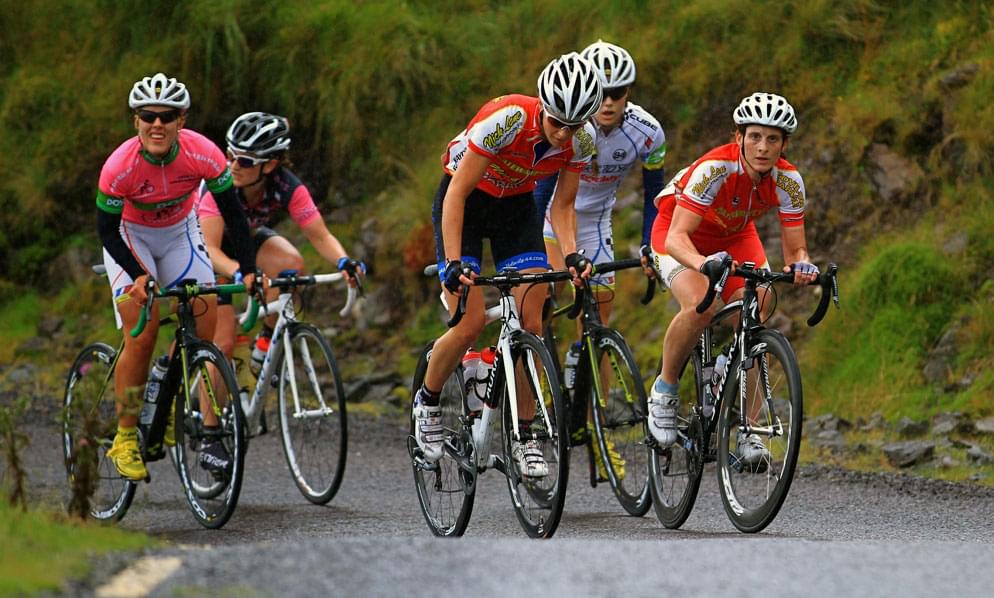 Boddy led in a nine-rider group that prevailed on the 95km An Post ‘Queen’ stage which included the climbs of Ballaghabeama, Ballaghasheen and Coomaciste.

Boddy just pipped Fiona Meade of the Munster team in the sprint to the line in Sneem with race leader Kamilla Vallin (Reelight-Bike Toyz) in third.

Amalie Dideriksen of Reelight-Bike Toyz took over the lead of the IVCA Queen of the Mountains classification from Siobhán McNamara (Look Mum no Hands) after taking top points on all three classified climbs.

The Sneem Hotel County Rider jersey passed from Louise Moriarty, who missed the winning selection on the first climb of the day, to Fiona Meade who now has a 44 second lead over McNamara in the prestigious competition for local riders.

There was drama before the start when double stage winner and third-placed rider Femke van Kessel (NWVG Bike 4 Air-Dames) was forced to pull out through illness.

Dideriksen led over the top of the daunting Ballaghabeama from Lowri Bunn and Vallin. Boddy made a huge effort to get across to the leaders on the descent and on the run to the slopes of Ballaghasheen by which time the nine rider selection had been made as the main group languished more than a minute in arrears.

Dideriksen and Bunn were once more to the fore on the second category one climb of the day with Bunn’s Abergavenny RC team mate Laura Murray next over.

By the time the riders made it to the final climb of the day at Coomaciste on 68km, Boylan was ready to test the legs of race leader Vallin with a series of stinging attacks which stretched the group but failed to snap the elastic.

Dideriksen was headed over the top by Mountains Classification leader Siobhan McNamara but the latter was adjudged to changed her line in the sprint for the top and the standard one-minute time penalty was applied.

The upshot is that Danish junior rider Dideriksen now has an unassailable 17-point lead in the ICVA Queen of the Mountains competition with just tomorrow’s stage to go.

Boylan tried to find a way clear of Vallin in the run in to Sneem and the race leader herself tried a speculative attack with just over a kilometre remaining but the group was intact as the sprint began.

Meade briefly found a way past Boddy but the latter kicked again in the closing metres to record her second victory in succession with Vallin retaining enough energy for third at the end of a hectic day’s racing.

Tomorow’s Bracken Clinic final stage is a 58km circuit starting and finishing in Sneem including the second category climb of Molls Gap and the third category ascent of Carraig na Gaoithe.