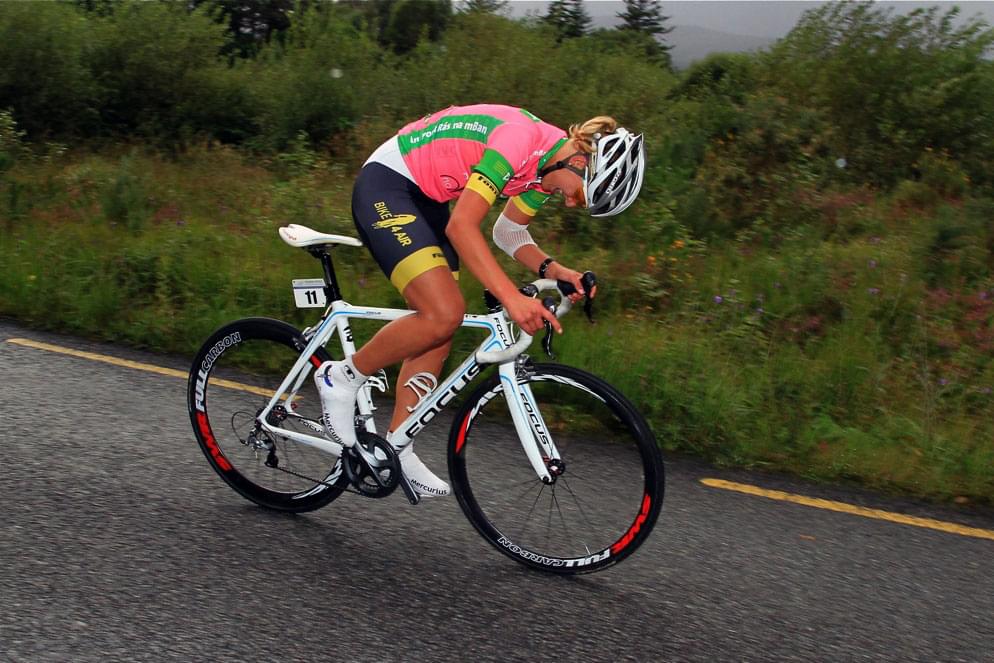 Derry native Clare Dallat of the Galway-based Black Rose Racing Team took over the lead of An Post Rás na mBan with a decisive victory in the second stage 3.4km time trial in Sneem, Co Kerry this afternoon.

The Melbourne-domiciled racer was ten seconds faster than Kamilla Vallin of Denmark in the WomensCycling.ie sponsored stage with Lydia Boylan of the Ireland team third and Dallat thus took over the lead from Femke Van Kessel of the Netherlands who finished fourth.

Van Kessel NWVG Bike 4 Air-Dames had taken the morning 66km opening road stage in a 40-rider sprint finish but with no time bonuses for stage wins and 40 riders locked on time, the winner of the time trial was always likely to emerge with the overall lead.

Van Kessel’s morning stage had been an eventful one, the Dutchwoman crashing on the first of four 16.5km laps which led to a long chase back to the bunch. Shortly after she regained contact, she took the second lap intermediate sprint which proved a useful test ahead of the real thing at the end of the race.

Team Ireland controlled the pace on the front with the Reelight/Bike Toyz-Kvickly squad from Denmark and the NWVG Bike 4 Air-Dames riders also prominent on the climb of Letterfinish.

Showing her ability in a race that suits climbers was Danish Junior Amelie Diderickson of Reelight/Bike Toyz-Kvickly who took top points on the first and third ascents of the testing hill that gave her a maximum score and a handy early lead in the IVCA Queen of the Mountains Competition.

Dallat’s stunning performance in the time trial means she also leads the Sneem Hotel County Rider classification although as she will wear the jersey of overall leader of An Post Rás na mBan, the County Rider jersey will be worn by Louise Moriarty (Look Mum no Hands) in tomorrow’s 80km third stage which includes ascents of Knockanoughanish, Healy Pass, and Caha Pass.