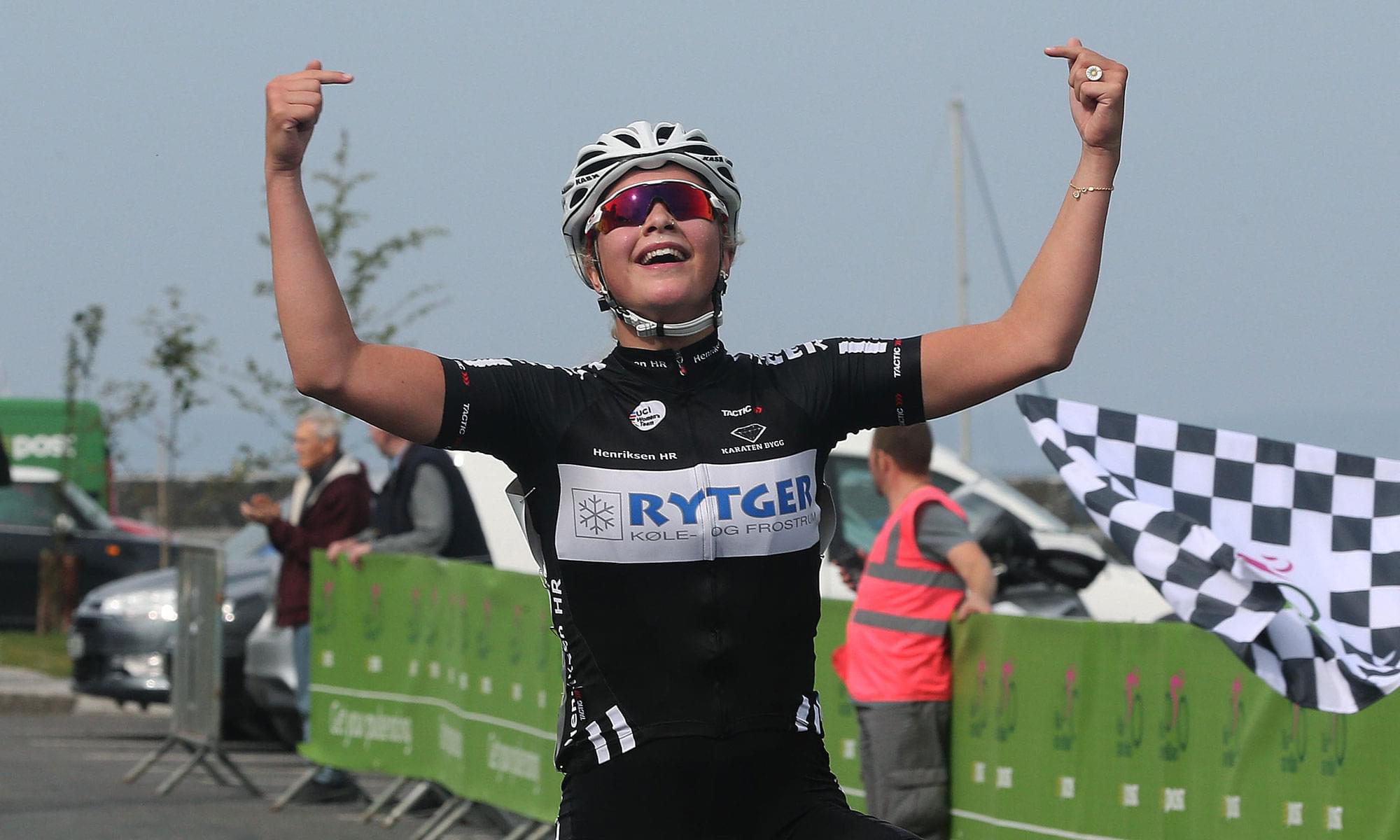 Emma Norsgaard Jorgensen soloed in just ahead of the remains of a race long breakaway to take stage two honours in An Post Rás na mBan.

The Danish teenager attacked inside the final kilometre and raced clear by four seconds to hold off Stephanie Pohl (South Netherlands) and Eileen Roe (WV Breda) in the final dash to the line in Ballyvaughan.

Those three riders were the survivors from an eight-woman group that formed following an early attack by Dutch duo Femke Kuipers (West Frisia) and Mirthe Wagenaar (WV Breda manieu.nl).

Wagenaar took the points at the top of the first of three categorised climbs on the day, the third category ascent at 15km and would ultimately end the day in the lead of the Wicklow 200 Queen of the Hills classification.

Kuipers and Wagenaar dangled off the front of the main bunch for some time before Kuipers punctured and dropped back to a chasing group just as Wagenaar was joined by Britain’s Nikki Juniper (Giordana-Triton).

Soon after Eileen Roe (WV Breda-Manieu.nl), Annasley Park (Team Giordana) and  Stephanie Pohl (South Netherlands) along with Kuipers linked up with Wagenaar and Juniper to make it six out front .

Kuipers dropped back to the bunch again and it was time for the Irish to get involved as national Road Race Champion Lydia Boylan (WNT) and Eve McCrystal charged across the gap in the company of Emma Norsgaard Jorgensen to make it eight riders out front with 35km gone.

Working well together, Wagenaar, Juniper, Roe, Park, Pohl, Boylan, McCrystal  and Norsgaard-Jorgensen opened up an advantage of 1m28s gap approaching the second climb of the day, the first category ascent at the Cliffs  of Moher where Stephanie Pohl took the top points ahead of Wagenaar.

The gap dipped below a minute with 32km still to race.  Pohl took the final climb of the day ahead of Wagenaar but the destination of stage honours was still very much in doubt approaching the final 20km.

Eve McCrystal and Annasley Park crashed out of the lead move after a touch of wheels and, though both got back up to chase, their chances of a stage win were gone. McCrystal joined a chase group of seven just 28 seconds down in a thrilling battle to the chequered flag.

Up front the leading six became five when Wagenaar paid for her stage-long efforts and was despatched to the chase group as Juniper, Roe, Pohl, Boylan and Norsgaard-Jorgensen raced on towards the finish in Ballyvaughan.

An attack by reigning World Track Points Champion Pohl inside the final ten km saw Boylan and Juniper become detached as the German was joined by Norsgaard-Jorgensen and Roe for the final push to the line.

Inside the final 500m Norsgaard-Jorgensen made her bid and distanced Pohl by four seconds with Roe a further three seconds in arrears.

Stephanie Pohland Eileen Roe are tied at the top of the Points Competition and it is Pohl who will wear the NDC leaders jersey in stage three.

The 80km route starting and finishing in Scarriff is an all new addition to the race and includes three classified climbs and more demanding roads primed for another great battle on the roads of East Clare.