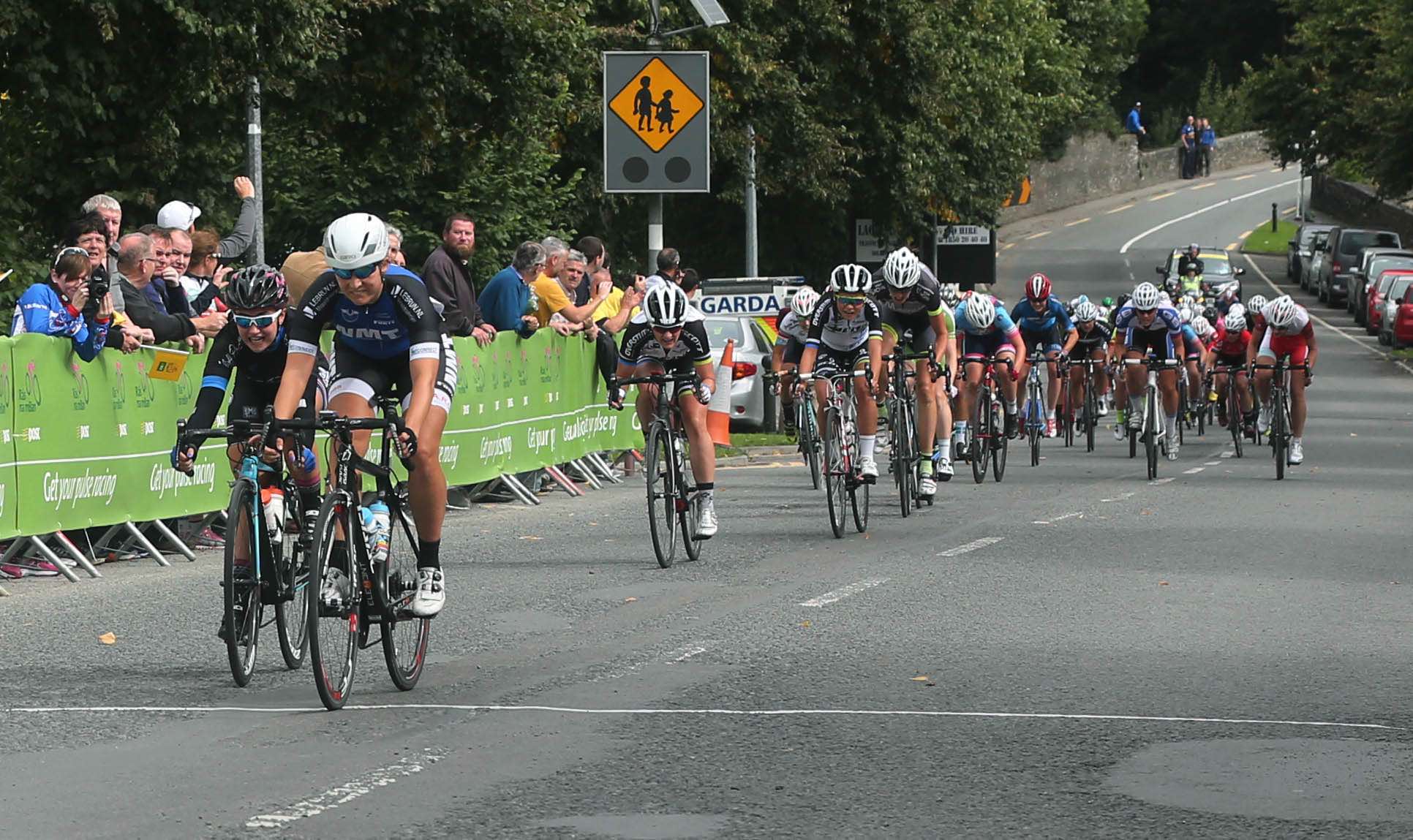 Melissa van Neck led in a large group to take the spoils on stage two of An Post Rás na mBan in Castlecomer today.

The Regio Team Noord Holland rider outsprinted Grace Garner (Cliff Pratt Racing), Helene Gerard (Team Breizh) and the rest of the 55-rider group which assembled on the roads approaching the finishing town in the closing stages.

Safely in the main bunch contesting the win was race leader Rikke Lonne (Team Crescent Dare), the winner of the opening stage, who answered all the attacks and ultimately preserved her 30 second lead in the General Classification.

The 75km stage began at the Discovery Park in Castlecomer and took in two separate loops around the picturesque Kilkenny town including two classified climbs.

The first of the climbs near Ballyraggett was crested first by IVCA Wicklow 200 Queen of the Mountains Winner Marieke Kerkvliet (WV Breda) and she further enhanced her lead by topping the second climb at Bilboa with 16.4km to go to go nine points clear of WV Breda team mate Laura Gorter.

By this time all significant attacks had been quelled and the group swelled to more than 50 on the charge down to the finish line in Castlecomer.

Across the narrow bridge and into the final 200m Van Neck was already a bike length clear and, try as she might, last year’s double stage winner Garner could not find a way past the flying Dutchwoman who won the second Leinster Stages jersey for her troubles.

Second was considerable consolation for the Leicestershire star who secured the lead in the NDC Points competition which she won 12 months ago. Garner also leads the Young Rider Classification for the Womenscycling.ie white jersey.

Best Irish Rider for the green Kilkenny CoCo jersey has moved onto the shoulders of Ciara Doogan, the Donegal youngster racing with team Rytger who is locked on time with erstwhile leader Grace Young and who secured the jersey on count back of stage finishing positions.

Lonne now leads a group of 52 riders 30 seconds in arrears led by Garner, with Scotswoman Eileen Roe (WNT) in third. Leading Irishwoman is Lydia Boylan, the Nottingham-based full time rider who has moved into ninth position overall courtesy of her sixth place finish on the day.